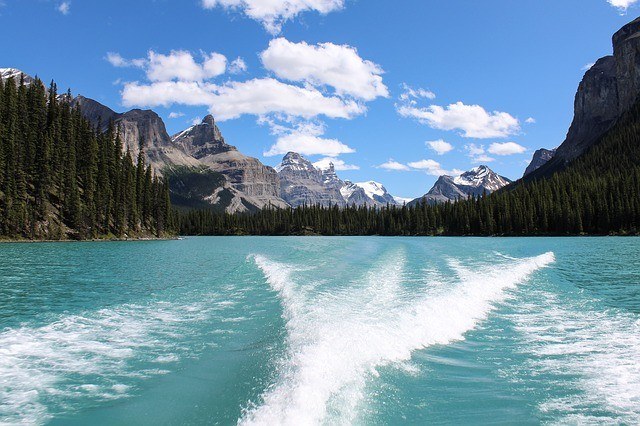 Have you looked at your wake lately?

I will say that I did get up on the wakesurf board, travelled about 2 feet, took a nose dive and decided to let the kids take over.

Wakesurfing, if you’re not aware of it, is a sport where you maneuver a specially designed wakesurf board, without a tow rope, in the wake of the boat. It is not wakeboarding, where the board is attached to your feet and you use the tow rope for propulsion, nor is it kneeboarding, water skiing and certainly not tubing! In wakesurfing, you only use the tow rope to get up out of the water and then to pull you for a brief time until you can use the wake of the boat itself to keep moving through the water.

And although every boat leaves a trail or wake behind it as it moves through the water, wakesurfing boats are designed to create a deeper trough of water that you can literally surf on. No, it isn’t like the huge curling waves that look so cool in the movies, but it is quite awesome.

After my brief attempt at wakesurfing, I decided driving the boat was just as fun as surfing (well, maybe almost as fun?).

What does that have to do with being a Human Leader?  Hang (ten) with me for a few minutes and I’ll tell you.

Wakesurfing boats are phenomenally engineered water craft.  They can, of course, be used for traditional sports like skiing and tubing, but when you want to wakesurf, they show their superiority over traditional speedboats.

Wakesurf boats have several design features that create the proper conditions behind it for someone to surf.

First, the hull is designed to split the water more efficiently. Second, there are ballast tanks that you fill with water to create more drag (who purposely puts water into a boat? Third, there are moveable fins under the hull that direct the water one way or another depending on which foot the surfer prefers forward.

If that isn’t enough information for you here’s a little more: the propeller is further forward on the boat for safety and finally, when you steer, you keep turning slightly toward the side the surfer is on for maximum wake.

Alright, enough of that.  How does this apply to being a Human Leader?

Well, several years ago, in his book Integrity, Dr. Henry Cloud used the word wake to describe the effect we all have on the world around us.

He wasn’t talking about the trail of chaos my son leaves throughout the house as he moves from one activity to another. Clothes, toys, nerf bullets everywhere. At least not exactly.

He was talking about the trail or wake we all leave as we move through our entire lives.

I totally agree with him.  And I would add that while everyone is driving a boat of some sort that leaves a wake, leaders are driving a boat that the people they are leading are trying to surf behind.

AND, Human Leaders need to pilot a specially designed Human Leader Wakesurfer so they produce the optimal wake for the people trying to surf in their wake.

Are you piloting a Human Leader Wakesurfer or do you have an ordinary boat? Maybe you’re in a rowboat and can’t get enough momentum to lift your people out of the water. Maybe you’re in a high tech fishing boat, it has the horsepower, but it is rather difficult for people to ski or surf behind.

Or perhaps, you have an older model ski boat.  It’s great for skiing and you can wakeboard behind it, but your people have to hang on to the rope to perform. If they let go of the rope, they immediately slow down and start sinking. They are never free of the dependence on the tow rope.

The Human Leader has learned how to pilot a MasterCraft X46 and can maintain a wake that allows those surfing to drop the tow rope, do tricks and perform in ways the Human Leader only dreams of, allowing both of them to reach their dreams and goals.

In future articles, I will be discussing how to upgrade your boat and pilot it like a Human Leader.

[callout]Join The Human Leader Revolution! Subscribe to the email list to continue to receive practical and entertaining information on leadership from Dr. Van Meter.[/callout]